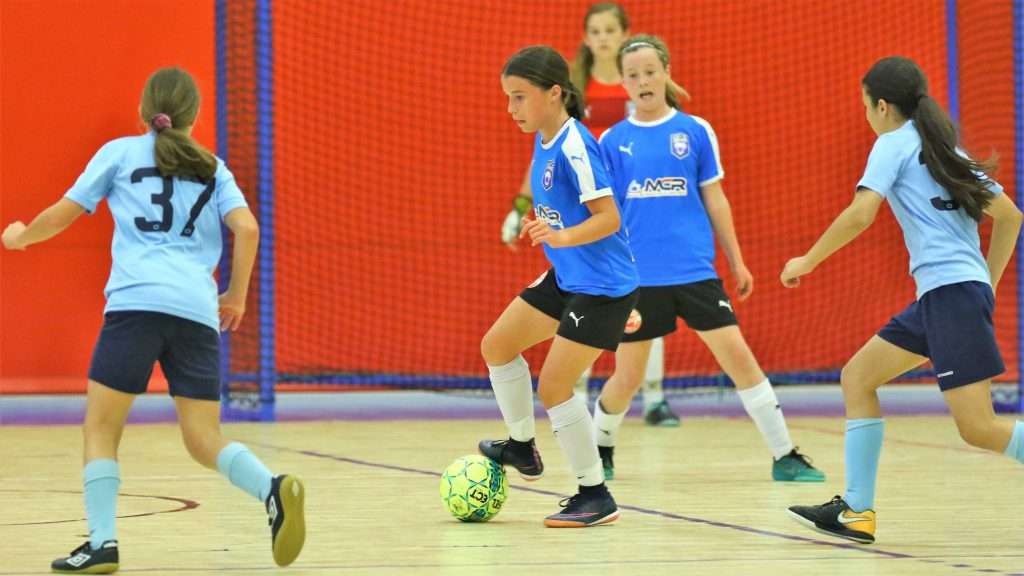 We’ve had a solid year with our academies. Their level of improvement throughout the year has been evident. It was once again great to see the kids in action on Saturday for the final time this year. We take this opportunity to thank the coaches, the players and the parents for their commitment and invite all players back again to next years trials.

The 12 Boys finished third following their sixth straight win. The boys made light work of Sydney Futsal on the weekend with a comprehensive 12-2 thumping underlining a solid season for our young generation of Taipans. Oliver Randazzo has been tearing it up through the year and his five goal haul this week highlights his finishing skills. Levi Martins and Luca Radice-Jones helped themselves to a brace each whilst Lachlan Flood, Noah Crapis and Brodie Masters also got themselves on the scoresheet. The boys face SD Raiders in the semi final on 19 January.

Just before the 13 Girls kicked off, Santa made his usual visit to URAC before Christmas. The kids were treated to some lollies whilst they got the opportunity to tell him what they wanted for Christmas.

The 13 Girls have been great all season. They train the hardest of any other team in the club and credit to the girls and Alan Kent for their continued improvement. They have battled hard in many games and this week was no different against a determined Sydney Futsal side. The visitors hit the lead half way through the half and despite waves of attack, they were able to repel many of the Taipans’ raids. That is until Hazel Atkins popped up a minute before the break to level the scores. The girls’ second half in most games is where they usually get the job done and this week, it was a similar story. Just 2 minutes in and Atkins got her second to put the girls in front and right on the stroke of full time, she put the icing on the cake scoring a hattrick and sealing a 3-1 win which sees them finish the season in second spot. They will play Raiders for a spot in the Grand Final.

Over to the 14 Boys who blew their title hopes last week. They had sewn up a finals spot and were no chance of winning the league but credit to the boys for going out this week and putting in a solid performance where they blew Sydney Futsal’s outside chance of making the playoffs with a sound 2-0 win. It certainly wasn’t plain sailing however goals on either side of the break to Jayden Bojlevski and Liam Bonetig secured victory and second spot. They take on Pheonix for a spot in the Grand Final.

Our 15 Girls have found themselves just that one step behind jut about all season. Their 0-2 loss on the weekend was their eighth loss but six of those have been by two or less goals going to show that they have not been that far off the pace. It was another dogged performance from the girls as they held Sydney Futsal scoreless during the first half however they got their break through half way through the second period before doubling that just two minutes later. The girls huffed and puffed but could not find a way through finishing off what we are sure was a slightly frustrating year for the girls. Their season is over.

The all-conquering 16 Boys tasted defeat just once all season and that was ironically against this week’s opponents Sydney Futsal back in Round 7 where nothing seemed to go right. They were out for redemption and credit to Sydney Futsal as they were giving as good as they got for the majority of the first half. The Taipans did however take a narrow 3-2 lead into the break. The second half though was one way traffic with the Taipans accelerating away scoring four unanswered goals in their 7-3 triumph. It was great to see Cameron Deguara getting extended minutes where he capitilised with two goals and the ever reliable Giovanni Panuccio also helping himself to a brace. Alex Bonetig, Cody Ashburner and Tyson Black all also got their names on the scoresheet. The boys take on Pheonix for a spot in the Grand Final.

The 18 Girls found themselves having to rely on other results to go their way if they were going to sneak into the playoffs and a six goal plus win was necessary should one of the other games finish in a draw. With this in mind, the girls came out firing hit Sydney Futsal with full force as they accumulated seven goals in the first half alone in an almighty blitz. With the job seemingly done, they took their foot off the gas a little in the second despite running out 11-2 winners. When news filtered in that the win was enough, the girls were ecstatic about sneaking through to the playoffs and on this form, they have the ability to be a force. Hatricks to Ursula Bratjanscak and Rilee Wagner were accompanied by two goals each to Ashley Kotevski and Olivia Mavridis whilst Beth Whitaker also found the net. The girls will take on league champions Raiders in January in what is a mouth watering semi final match up.

Sadly, UTS forfeited their game against our AWD team which saw the boys clinch the League Championship. They have dominated this competition over the last six years and it has been extremely disappointing to have had their last game at home cancelled out. Our coaches got the opportunity to show the players how it’s done when they played a friendly against the AWD boys in the timeslot. There are sure to be some sore bodies in the morning.

The Youth Men have had a disappointing second half of the season. They sat in second place at the half way mark but managed just one win in their last 7 matches. Things started well enough with Louis Connell getting the boys off to a solid start with a neat finish and they held this lead largely through some good scrambling defence and good goalkeeping by Kaydin Harrison. Just three minutes into the second, Sydney Futsal drew level and the game was once again in the balance however with 8 minutes left, the visitors hit the lead and with Taipans in power play, they scored again. Nicolas Tomasiello pulled a goal back late to get within one, but it wasn’t enough as the visitors took the points to end our boys’ season.

The Open Women had already secured fourth spot however a win and other results could have seen them jump to third. It was a cagey start as the Taipans struggled to get some fluency before two goals in a minute saw the Taipans jump to a 2-0 lead. Sydney Futsal did manage to pull a goal back just before the break to unsettle the Taipans. The ladies regrouped after the break and showed just why they could be a dark horse in the finals with four well taken goals to wrap up a comprehensive 6-1 win. The other result did not fall our way and the ladies now face League Champions Boomerangs in the semi-final.

The Open Men have been on fire over the last month and made a late charge for the finals. The equation heading into the match was Taipans must win and two other results had to also go their way. The Taipans put on an attacking transition clinic in the first half as they peppered the Sydney Futsal goal regularly having scored seven times in the first half. A couple of sloppy goals at the other end saw the visitors also score three in a 10-goal first half. The Taipans had effectively already won the game and saw it out in a goal frenzy 10-5. Matthew Mazevski was virtually on the end of everything scoring a record 6-goals which also sees him take out the League’s Golden Boot. Mitchell Ferraro bagged a brace and Cody Waller and Kei Mitani also getting on the scoresheet. Kyle Del chipping in with five assists. With one result already going the Taipans way, they were sweating on Boomerangs to beat Crusaders however when news filtered through that that game ended in a draw, the Taipans season was over. Such a shame as the boys were just starting to show their potential.

As a club, we finished fifth in the Club Championship and recognise we have work to do if we are to make a serious challenge for promotion.

We wish all our players and their families a very merry Christmas.