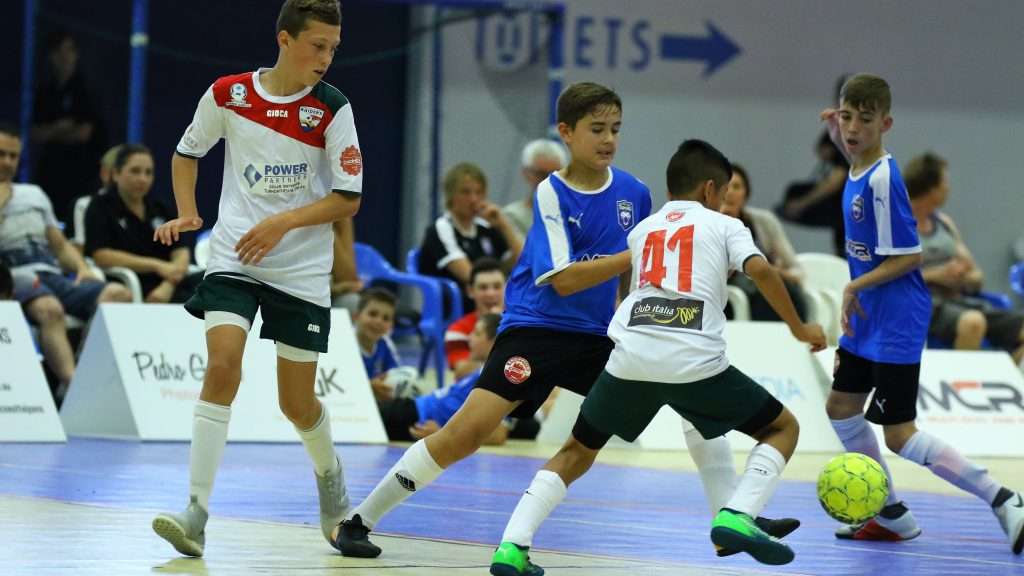 It was once again great to have all our academy and development teams in action. With many thanks to the local clubs that came out to help give our teams a game. There is vast improvement in each of our teams and we are delighted to have futsal form part of their development.

12 Boys were looking to hang onto third position and they knew three points were crucial against the second placed SD Raiders. The boys got off to a good start creating several scoring chances which culminated in a well earned 2-0 lead going into the break. Despite SD Raiders pulling a goal back, the young Taipans went on with the job recording a worthy 4-1 win which effectively seals a playoff position. Goals to Brodie Masters (2) and Levi Martins and Lucas Jackson.

The 13 Girls were essentially playing for the League Championship with top of the table SD Raiders looking to stave off the fast finishing Taipans. The game could not start any worse for the Taipans as SD scored inside the opening 30 seconds. The game was end-to-end with plenty of goalmouth action. With the game drawing to a close, the Taipans threw everything at SD but the visitors held on for the win and championship.

The 14 Boys was also a potential championship game and the Taipans came out firing early however desperate defending was the order of the day with both teams scrambling well. Solid chances were at a premium although Taipans shot stopper Gus Hoefsloot was outstanding in the first half. The first goal was always going to be crucial and when SD Raiders scored with 6 minutes to go, it was desperate times for the Taipans. The opposition had a player sent off however the boys could not capitalize and subsequently conceded again as they threw caution to the wind. It was in the end a 0-2 loss which saw the League Championship decided to SD Raiders.

The 15 Girls were looking to keep their slim playoff hopes alive and they knew it was win or bust. After a tentative opening period, the game sprung to life when SD Raiders scored twice in the space of 2 minutes to set a strong platform. Breanna McCormack pulled a goal back for the Taipans right on the stroke of Half Time to give the home team some hope and when Zoe Anderson levelled it up mid-way through the second term, it set up a grandstand finish. The Taipans couldn’t find a winner and had to settle for a 2-2 draw which effectively sees them bow out of the playoff race.

The 16 Boys have been super consistent all year and they knew three points would see them clinch the League Championship. It was a nervous start to the game as bottom placed SD Raiders came to play and some desperate defending and good goalkeeping from George Gee kept SD Raiders quiet and a well taken goal saw the Taipans take a 1-0 lead into the break. A couple of quick goals put the boys at ease before SD returned fire. The Taipans put the pedal to the floor and went on a scoring spree eventually taking the game and League Championship with a nifty 7-2 win. Giovanni Panunccio bagging a hattrick with Tyson Black getting a double along with goal contributions from Alex Bonetig and Josh Montgomery.

The 18 Girls faced playoff contenders SD Raiders and they too required a win to boost their playoff chances. The Taipans hit the lead through a heavy deflection however by half time, they found themselves 2-1 down. The Taipans threw players forward and forced SD Raiders deep in their own half. A late goal to Christina Videla levelled things up and the Taipans could not add any further to the score which ended 2-2. The draw is not the end of the road for the girls however they will now be also relying on results to go their way if they are going to feature in the playoffs.

In another of those matches where it was win or bust, the Youth Men went into this match on the back of four straight losses after a bright start to the season. It was a frenetic opening however both goalkeepers were in outstanding form. The SD Raiders goalkeeper particularly was a rock for his team as the Taipans looked to force the issue. 0-0 at Half Time and all to play for. The Taipans looked to dominate chances and there was simply no way through their goalkeeper and as so happens in futsal, the visitors pounced with one of their few chances and hit the lead. Try as they might, the Taipans just could not break the opposition down and were left to lick their wounds after a 0-1 loss.

The Women were looking to put last weekend’s heartbreaking loss behind them however a thunderbolt of a goal to SD Raiders saw them take the lead early and on 12 minutes, they doubled their lead as we headed to the break. It was a poor first half to be fair. They did however come out in the second half a different side and within 5 minutes, Cayla Constable pulled a goal back and midway through the second Elise Battin drew the Taipans level. With their tails up, Kya Stewart made the comeback complete 10 minutes from time as the Taipans run over the top of the tiring visitors and recorded a 3-2 win which now secures playoff futsal for the ladies.

The Men’s team were on a bit of a roll and making a late charge for a finals series berth and it has win elimination futsal for them over the least three weeks. Taking on second placed SD, this was no different. It was a sound start for the Taipans as they eased themselves into the game and when Matthew Mazevski scored to give the boys the lead midway through the half, it was game on. The Raiders drew level just three minutes from the break however just 60 seconds later, Cody Waller put the Taipans ahead again just before the break.

Mazevski scored again on 33 minutes to extend the Taipans lead to 3-1 however just minutes later SD Raiders pulled a goal back (3-2). The visitors then played power play for a good portion of the second half with Mitchell Ferraro pouncing on a loose ball to make it 4-2. With four minutes left, SD Raiders scrambled the ball over the line to set up a nervy finish however a swift counter attack saw Mazevski neatly finish the game 5-2 and claim a hattrick. The boys live to fight another day.

It’s the final round of the regular season next weekend and there are still a few games with major bearing on the finals as we look to host Sydney Futsal Club.