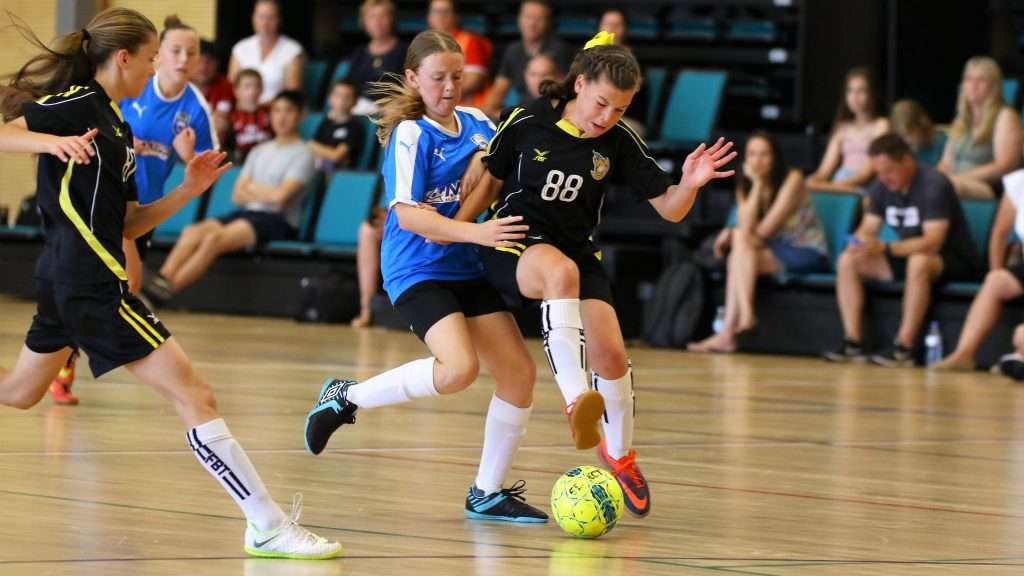 We travelled to the impressive complex at Thomas Hassell Anglican College to take on rivals Raiders FC. They touched us up in the last club encounter and our teams were determined to change that.

It was a good start to the day as our Development teams showed that the future looks good with impressive performances in the early curtain raisers.

The 12 Boys kicked off the official part of the day with a hard fought 5-3 win where we did not have everything our own way. Oliver Randazzo and Levi Martins dazzled and helped get us over the line but some desperate defending from Noah Crapis also contributed to him saving at least two goals off the line. It has been the team’s desperation in defence and clinical finishing that should see them feature in the playoffs this season.

The 13 girls have had a stellar season so far and they kept their hopes of a minor premiership alive following an 8-2 thumping of Raiders. The girls dominated from start to finish and to highlight their depth, there were six different scorers. The girls now face SD Raiders next week where a win will send them to the top of the league.

The 14 Boys are having a stuttering finish to their season. After holding the lead for the majority of the season, the lads have only won once in their last 4 games to give the Championship lead up. All is not lost though as a win next week and the boys will be back in pole position. The boys hit the lead early before Raiders bounced back scoring back to back goals and with the game on the line, we pushed players forward and we received a fortunate penalty late in the game which was converted to salvage a 2-2 draw.

The 15 Girls were short a couple of key players this week but that did not stop them from putting in a dogged effort against the table topping Raiders. Taipans fell behind as early as the second minute however to the girls’ credit, they fought hard to contain the free scoring Raiders and also create a few chances of their own. Despite their heroic efforts defensively, the Raiders found a second midway through the second and they saw the game out 2-0.

The 16 Boys needed just 4 points from their last three games to secure the minor premiership however this competition is tough where almost any team can beat anyone on their day. Raiders themselves were desperate for points as they were trying to hang on to their playoff position. The Taipans hit the lead through Rocco Mellino before a quick reply from the Raiders tied things back up. A well taken Alex Bonetig goal saw the Taipans take a 2-1 lead into the break however they drew level again just 2 minutes into the second half. Disaster looked to have struck when Raiders go the go-ahead goal just 5 minutes from time however as true champions do, the Taipans picked up the intensity to draw level just 2 minutes from time to tie the game 3-3.

The 18 Girls game was a fiery encounter which neither side looking to take a step backwards. The game started with great intensity however it was the Taipans that struck first with a well taken goal to Olivia Riddell. The Raiders are sitting top and they were looking to go for the win and seal the league championship. They scored twice to lead 2-1 at the break. The Taipans battled hard and a goal to Christina Videla saw the Taipans draw level. Just as the game was looking destined for a draw, Raiders nicked a goal deep into the game to see out the game 3-2.

AWD guys were looking to put last weeks thumping loss behind them as they faced the same opposition just 7 days later at the same place. A week is a long time and the boys found their groove etching out a 4-1 win which just about sees them record their 6th league title in a row. Steven Delovski bagged a brace whilst Rocco Musumeci and Patrick Mitchell also found the net in a morale boosting win.

The Youth Men is a tough competition and the Taipans were looking for three points to give themselves a shot at a playoff spot. Taipans hit the lead through Louis Connell however the Raiders fought back to level it shortly after. A Dwight Norris goal minutes before the end of the first half saw the Taipans take a 2-1 lead into the break. The Raiders hit back again in a see sawing battle before the Taipans scored again through Tyson Black. In an incredible twist of fortunes, the Taipans conceded minutes from time to level the match and they went for glory as they elected to use the power play however the Raiders countered quickly with seconds left and capitalised on a stretched Taipans defence to steal the points 4-3.

The Women faced second placed Raiders and after a nervy and even opening period, the Raiders capitalised on a defensive error to lead 1-0 at the break. The Raiders doubled their lead on 35 minutes before Elise Battin pulled a goal back almost immediately to give the Taipans a sniff. The Taipans used power play well before the final whistle and their offensive pressure finally told on the Raiders as flying keeper Danika Matos found space and scored an equaliser with just a few minutes left. Just as the game looked destined to end in a draw, a sloppy turnover on the half way line saw the Raiders break quickly and they scored with 10 seconds left on the clock to steal the three points 3-2.

The Men had the perfect weekend last week and they are finally starting to play the futsal we know they can play. It was three points or bust for the Taipans as they have given themselves an unlikely shot at a late push for a finals birth. Despite an onslaught on the Raiders goal, the Taipans could not find a way past their goalkeeper who looked to be having an incredible day. As luck would have it, the Taipans hit the post at one end and seconds later they found themselves one down. That is how it stayed at the break however just 5 minutes into the second half, a well worked move saw Dion Sterjovski and Matthew Mazevski link up for a great team goal to level the scores. Just three minutes later, Sterjovski was on hand to neatly finish and put the Taipans ahead before an amazing turn and volley from Cody Waller saw the Taipans take a 3-1 lead. The Raiders pulled a goal back on 35 minutes after a frenetic opening to the second half. The game was tight and tense as the Taipans were looking to hold on against a Raiders onslaught. The Taipans finally sealed the points after a corner set piece was handled on the line resulting in a penalty which was converted sealing a 4-2 win and strengthening the Taipans’ late push for a finals spot.

We host SD Raiders next week in what shapes as a monster weekend for so many of our teams. There are League titles and top four aspirations all going on the line as we head into the penultimate weekend of the regular season. Join us at URAC for what we hope is a special day.