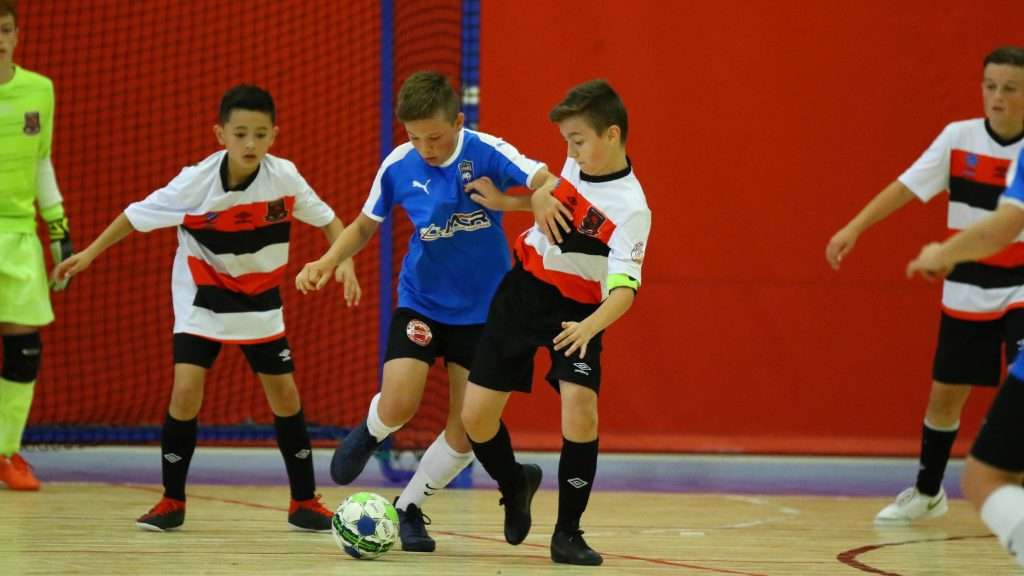 We had all our academy teams in action on Sunday as we took on West City Crusaders on Sunday in the second of the double header games over the weekend. Sadly, Crusaders do not field any academy sides, but it was great to see the likes of Wolves and Russell vale coming in and having a kick with our academy teams.

The 12 Boys kicked off the day against Crusaders on the main court. Despite being a tad depleted, credit to the Crusaders for putting in a determined defensive effort throughout the game. The Taipans were dominating in aspects of the game except the scoreboard. The Taipans took a 2-1 lead into the break and could only add one more goal to take the game 3-1 and effectively seal their playoff position.

The 13 Girls were on a 3-game winning streak and looking to make it four. It didn’t take long for the Taipans to hit the ground running and girls continued a dominant weekend of futsal rounding out a comprehensive 9-1 win. The win sees the girls move to second spot as they give themselves a real shot at winning the League with three more wins. It is also worth a mention that not only are they lighting it up at the offensive end, they have conceded the least amount of goals to date than any other team in their age division.

The 14 Boys suffered a shock loss on Saturday however they bounced back in style with a resounding 12-0 win over a Crusaders side that simply did not have answers to the Taipans threats. Liam Bonetig and Ben Caroutas doing most of the damage with four goals each. With SD Raiders losing over the weekend, the win sees the boys go top of the ladder (on goal difference) with just three rounds to go.

It was great to see the 15 Girls lead and go on with it from go to woe. The girls faced a Crusaders side still searching for their first win of the season however they were not about to give any presents on Sunday. They started the game strongly getting out to a two nil lead early before consolidating on that to score three more second half goals to take the game. The girls are an outside chance at finals series futsal but will need to win their remaining games and hope one or two results also go their way.

Top topping 16 Boys were on fire on Sunday. Four different scorers in Cody Ashburner, Tyson Black, Alex Bonetig and Giovanni Panuccio all scored a brace each to record a comfortable 8-1 win which not only helps the boys maintain their position at the top of the table, but it also strengthens their goal differential. They need just four more points from the last three games to go back to back League Champions in NPL1 and 2.

The 18 Girls had won just twice in their last six games coming into this match and knew that any dropped points here would be disastrous for their ailing season campaign. They struggled to beat a determined Crusaders in the reverse fixture and this time round, they managed to safely negate the game. A 2-0 lead at the break was doubled leading to a much more comfortable 4-0 victory which puts them back on track for a playoff position.

The AWD suffered a surprise loss (first one of the year) on Saturday and they knew they could not afford any more slip ups otherwise they could find themselves giving up their grip on the League title. Boosted by the return of Mitchell Forrest, the guys showed why they are favourites with a solid 6-1 win. Mitchell celebrated his return to the team with a hattrick whilst the reliable Rocco Musumeci also scored a hattrick. The win sets up an epic rematch and showdown with Raiders next week to possibly decide the league champion.

The Youth Men lost a heartbreaking match on Saturday and it was always going to be a difficult ask to get the boys up for another cracking game. After a tentative start, the match sprung to action with the Crusaders scoring the opening goal on 11 minutes and just as the Taipans were starting to get some momentum, a penalty in the last minute of the first half was converted to give the Crusaders a handy 2-0 lead.  Jordan Boutros pulled a goal back just after the break to give the Taipans some hope but 2 minutes later the Crusaders restored their two-goal buffer. The Taipans looking to use power play midway through the second to try and rescue some points however the game blew out as we succumbed to a 6-2 loss.

The Women had to win this game otherwise their top four hopes could have been dashed. Things started well as Danielle Wise put the Taipans in front with two well taken goals inside the opening 8 minutes. West City pulled a goal back two minutes from the break only for Kya Stewart to restore the two goal buffer. A late freekick with effectively the last kick of the half reduced the deficit to one goal as the Crusaders hot back again. It was all the Taipans in the second half as firstly Stewart scored just after the restart and Katelyn Leadbeatter scored to make it 5-2 before Wise got her hattrick to make it 6-2 and make it more of a reflection of the game.

It was a six-point weekend for the men’s side. They piled on the goals as they triumphed 5-1 against West City Crusaders on Sunday afternoon. Crusaders were the fastest out of the blocks, Ryan Faulkner fired home after six minutes to make it 1-nil. From there, it was all Taipans. Cody Waller bookended the performance with his brace, sandwiched between Kyle Del’s brace and the usual goal from Matthew Mazevski for his 12th of the season. That result takes the Taipans to nine points for the season and maybe, a late push for the finals.

Next match sees us play Raiders futsal away.