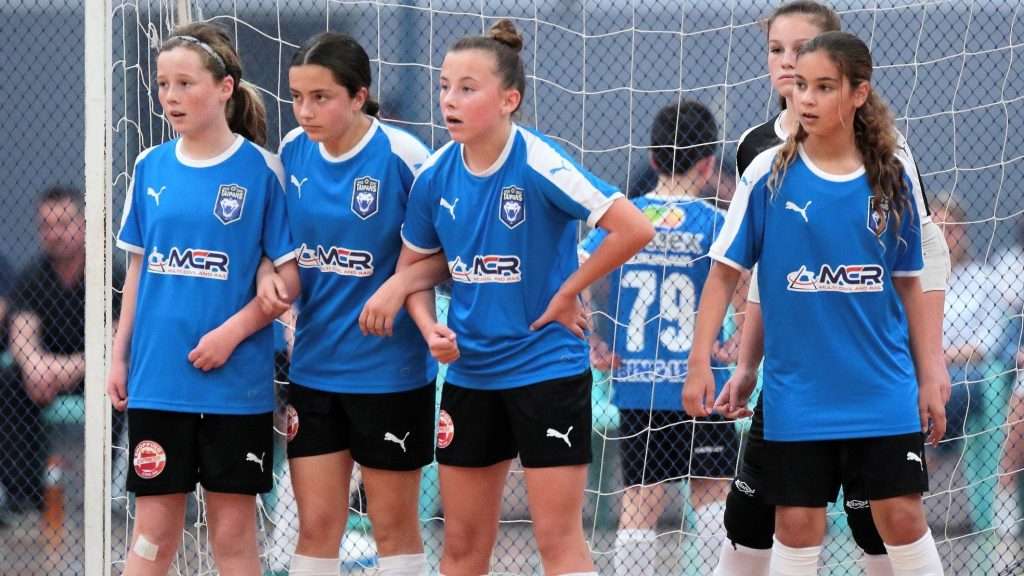 The omens were not good right from the start of the day when several of our academy and 12 Boys were late having been caught up in heavy traffic in the Northern Suburbs. Both our Boys and Girls Development teams got a hit out with games played in good spirit and fairy even.

Our 12 Boys faced a very young and inexperienced Pheonix side still searching for their first win of the season and it was the Taipans that hit the court running scoring a couple of early goals to settle things. Up 4-1 at the break, the Taipans continued their relentlessness despite trying some new combinations which ultimately led to a comprehensive 8-1 win.

The 13 Girls were coming in off a barnstorming finish last week which seems to have instilled a new sense of belief. It showed as they put on a ruthless display against a young Pheonix side who were scrambling most of the game. The Taipans raced to a 7-0 lead at the break and probably took their foot of the accelerator in the second on their way to an 11-0 whitewash.

The 14 Boys had a surprising last start loss last week and were hoping to get back on track against a much improved Pheonix side. Despite waves of pressure and chances, the Taipans could not find a way through the resilient defence from Pheonix who took the lead against the run of play. The Taipans were playing catch up from there and they found themselves two down after conceding another on the break. The boys threw bodies forward, but it was to not avail as Pheonix were good value for the points in a match that also saw the Taipans keeper sent off for handling the ball outside his area.

The 15 Girls as they have done for more than half their games hit the lead through a Zoe Anderson tap in and kept that advantage to half time. Two goals back to back saw Phoenix take the lead midway through the second before the Taipans stormed back nabbing an equaliser through sustained pressure which saw a shot deflected an in. The game ended 2-2 which was perhaps fitting given the context of the match. The draw looked to have dented any hopes the girls had of finishing in the playoffs.

The 16 Boys competition is proving to be tough. There are literally no easy games and when you are on top of the ladder in a competition like this, every other team raises their effort another 20%. The win last week was big and despite having a depleted side this week, the boys were looking to stay in pole position. It was a cagey start and both sides seemed to be cancelling each other out with scrambling defence. It was Pheonix however they broke through first and took that lead into the break. The Taipans side is full of character and they grinded away at the opposition forcing an equaliser through Josh Montgomery before an amazing solo effort from Giovanni Pannuccio saw the Taipans hit the lead for the first time in the match. Pheonix threw everything at the Taipans late in the game but it was not enough as we held on for a gritty win and a crucial three points.

On to the 18 Girls who took the lead inside the opening half of an evenly contested game. The game opened up a little more in the second as Pheonix went in search of a result. Chances went begging for both sides and the Taipans missed a couple of great looks. It came back to haunt them as Phenoix found an equaliser and then went ahead courtesy of a controversial free kick. The Taipans rallied and forced Pheonix on the back foot however time beat them as we went down 1-2 which saw the ladies drop (on goal difference) out of the top four.

The AWD boys travelled to Raiders and were looking to effectively wrap up the league championship. Things started as hoped with the boys racing to a 2-0 lead midway through the half before a late rally from Raiders saw them incredibly take the lead at the break. Down on troops, the Taipans tried in vain however the heat and tired legs got the better of them as the Raiders went on a second half rampage running out 10-2 winners.

The Youth Men were looking to bounce back after a 2 week break and they started brightly taking a 2-1 lead into the break. The second half livened up with both teams going hammer and tong. The game also got a little fiery as both teams were determined to get the three points. A third goal was added for the Taipans before an extraordinary sequence of events saw Pheonix pull a goal back through power play and moments later, they did levelled the scores with just minutes left to leave the Taipans shell shocked. Just as we thought we’d have to settle for a draw, the home club scored a cracker at the death to leave the Taipans wondering just what went wrong. The boys played well enough to get something from the game however as happens in sport, extraordinary things happen. That’s futsal.

Back at Hornsby, the Women’s team was looking to bounce back from their last hit out loss against a Phoenix side that was clearly growing in confidence. It was a positive start for the Taipans as they Danielle Wise and Emi Skopal put them 2-0 up at the break and seemingly in cruise control. There were no great signs of things to come however a couple of bombed opportunities seemed to change the momentum and when Pheonix pulled a goal back, it was game on. Another Taipans error was swooped on by the home side to level it up and moments later, Pheonix got their third in 5 minutes to flip the game upside down. Try as the might, Taipans couldn’t break down Pheonix as they “grew another leg” with their confidence and momentum and the Taipans were stung late in the game going for broke amazingly going down 2-4 in a game they controlled for so long.

It was now up to the men to rescue something from what was an ailing day. Things didn’t start well as Pheonix hit the lead inside 2 minutes and they had a few more chances early to extend it however some fine keeping from Brad Peryman kept the Taipans in touch. That proved crucial as the Taipans began to create some momentum and chances. Just before half time, Mitch Ferraro finally beat the keeper to level it up. It was all to play for in the second half and both keepers were kept busy repelling shots. Kyle Del needed two goes to beat the keeper and put Taipans ahead before Matthew Mazevski extended the Taipans lead to 3-1. Pheonix went power play and scored twice to level it up with just 5 minutes left and they smelled blood as they continued that ploy. The Taipans learned to contain it better and a couple of intercepts led to goals which saw the men eventually run out 5-3 winners.

All teams were now required to back it up on Sunday as we hosted West City Crusaders.