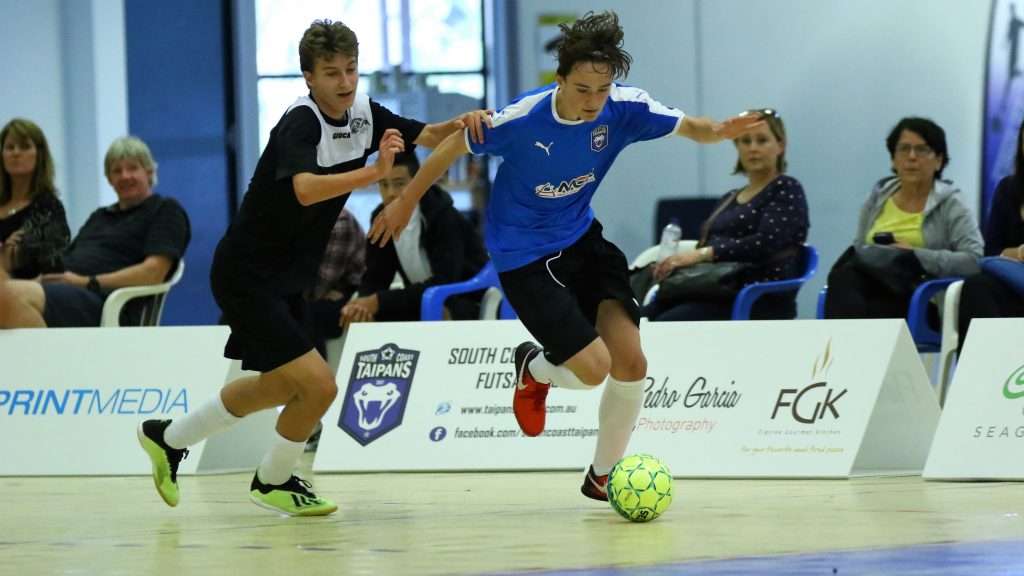 It was a super Saturday of futsal at URAC in Round 8 as the Taipans hosted first round opponents Sydney City Eagles. Over on court three, our academy and development teams were all in action. A big thank you to all the local teams coming in and giving our players a game.

With the day kicking off officially with the 12 boys, it was a chance for our boys to close the gap at the top and get some redemption for their round one 2-7 loss. This was a high caliber game that saw chances at both ends and the game proved to be very tight. The league-leading and undefeated Eagles took a 2-1 lead into the break and the Taipans blew several missed opportunities throughout the second half. It proved decisive as the Eagles prevailed 3-2 in a nail-biting contest.

Following last weeks surprise loss to Sydney Futsal Club, the 13 Girls Taipans were looking to get back to winning ways. Sydney City proved to be stubborn opposition early as the Taipans only converted a couple of their opportunities to lead it 2-0 at the break. It was a different story in the second as the girls ran riot scoring five times with Indiana Dos Santos and Demi Gay bagging hat-tricks in a 7-1 romp.

The 14 Boys kicked off what was a fabulous club championship points day with an 8-4 win over the Eagles. It wasn’t smooth sailing as the Eagles battled hard all game however the boys showed why they are leading the competition with some fine finishing. The Eagles keeper was kept busy all game with Anton Radice-Jones helping himself to a four-goal haul. The Taipans maintain their 3-point buffer at the top of the table.

On paper, the 15 Girls were facing an uphill task against a team that was battling it out for top spot. In the reverse fixture, the Taipans went down fighting 4-5 in round one. It was another battle with both sides going at each other in a fiery encounter. A Zoe Anderson goal in the first half was all that separated the sides and the second half saw more drama with the Eagles equalizing. Just as the game was looking to end in a stalemate, the Taipans for the second week in a row scored late however this time it was to nick all three points in an important 2-1 win that continued to set up our day.

The 16 Boys were coming off a shock 5-1 loss to Sydney Futsal last week. This allowed the rest of the field to close the gap in a competition where the top four places are separated by just 3 points. The Taipans were still leading the way though and it was crucial they put in a good performance. It didn’t take long for the Taipans to assert their authority on the match and they took a well deserved 2-0 lead into the break. The Taipans carried on with the job with a comprehensive 5-0 win that keeps them top (for now).

With nine points separating the sides, it was expected that the 18 Girls would regain their feet and get the result against the Eagles. It was a dogged display by the Eagles who appeared to have several 15 girls backing up. The Taipans dominating possession by only holding a 1-0 lead going into half time. Once Taipans scored a second, the Eagles looked a beaten side and two more goals soon followed as the girls ground out a sound 4-0 win to go third.

The Youth Men bounced back last week with a comprehensive win against Sydney City and were looking to continue their form. Continue they did. After a cagey start, Jordan Boutros put Taipans ahead and two goals just before the break to Joel Perry and Nick Tomasiello put the Taipans in firm control at the break. Inside a minute of the restart, Jamie Boutros converted to make it four and second to Joel Perry capped off a brilliant 5-0 win. It wasn’t all one way traffic though and credit to the boys for some desperate defending and wonderful goalkeeping by Kaydin Harrison kept the pressure on the Eagles all game.

The Women’s team were looking for some revenge on the Eagles following their miraculous round 1 comeback and 4-3 upset. It was a mistake that Taipans were not about to make again. The ladies led 2-0 at the break and dominated chances and possession despite a couple of brave saves by Miriam Bartlett. The ladies this time went on with it scoring a couple of nice goals in the second to take out the match 4-0 and firm their position in the top four.

Our men’s team was coming off a heroic midweek win over Inner West Magic however despite a good start, it was a clinical Eagles who seemed to punish every Taipans error taking a 3-0 lead into the break. It was much the same story in the second with the Taipans creating numerous opportunities that were thwarted by Eagles keeper John Dimitrakes who was having a super game. The Eagles showed just why they are #1 and unbeaten holding off Taipans and countering with efficiency to run out 6-1 winners.

It was never the less a great day for the club hauling in 18 club championship points.

The Senior teams played Boomerangs on Sunday at Illawarra Hockey Centre after a request by the ACT side to bring these games forward. Things didn’t quite go to plan for the Taipans.

The Youth men made a slow start and found themselves a goal down early and despite having the better chances, were unable to penetrate and break down a stubborn Boomerangs side in the first half. Two more goals followed as the Taipans looked to push in getting a result. The boys going down 0-3 in a game I am sure they wish they had back again.

The Women were looking to put pressure on league leaders Boomerangs however despite a bright start by the Taipans, it was Boomerangs who took the lead. In fact, the Boomerangs scored three times to stun the Taipans who probably deserved to be a lot closer than that. The Taipans did pull a goal back just before the break to grab some momentum. It was a renewed second half performance by the Taipans and just as they clawed another back. Just as the ladies got themselves back in it, they conceded again. A late power play saw the ladies claw another back, but it was too little too late as the ladies went down 3-4.

The Men made a bright start scoring a great team goal to go ahead. The Boomers however found an equalizer to level the game 1-1 at the break. It was a see-sawing battle in the second that saw the Boomers score two goals in the space of a few minutes to take a firm grip of the game. The Taipans rallied but were caught out again and much like the women’s another power play goal late on to the Taipans put some respectability into the game, but it was a case of missed opportunities coupled with some good execution by the Boomers that saw the Taipans go down 3-5.

Our junior teams travel to Queanbeyan on Saturday to see out the rest of Round 9.