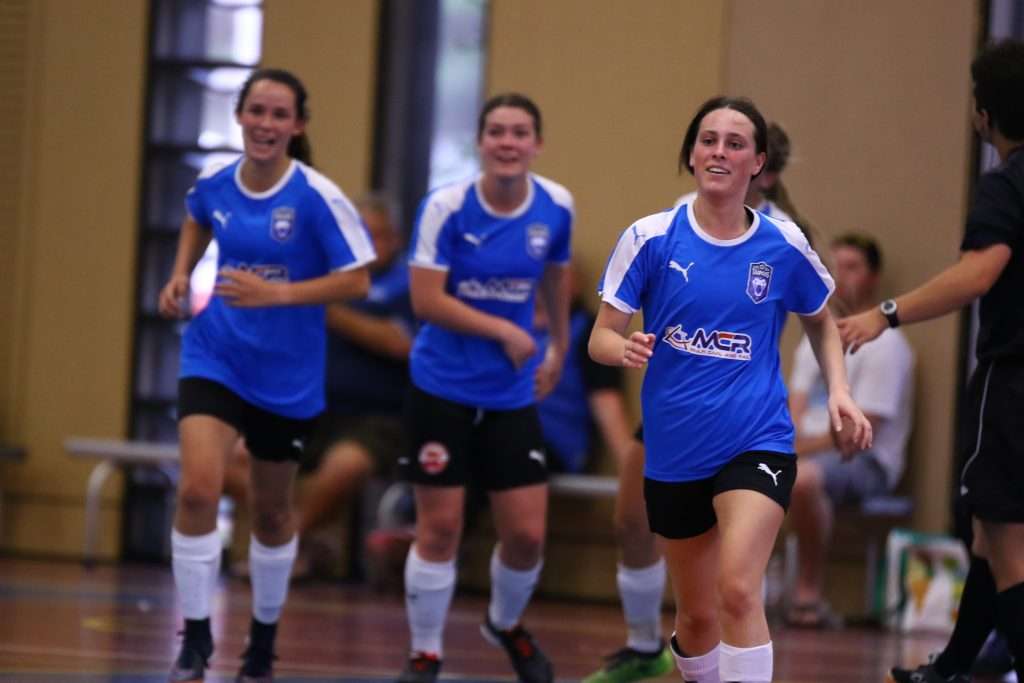 We travelled to UNSW to play 11 Boys and 11/12 Girls. It was a small venue with very limited parking never the less, it was a healthy hit out for our development sides.

The club packed up and moved down the road to Redfern where the graded teams were scheduled to play.

The official part of the day kicked off with our 12 Boys looking for some redemption following last week’s loss. They got off to a good start and carried that momentum throughout the rest of the game to get the three points. The boys started the game well and took a commanding 4-0 lead into the break. The second half petered out a little with the coaching staff looking to experiment a little. Hat tricks to Levi Martins and Oliver Randazzo were highlights.

It was not the most polished performance from the 13 Girls as they gave up a couple of soft goals to be down 2-0 at the break. A couple of good chances going begging in the process. The girls got themselves back in the game with a Beth Atkins goal midway through the half however just as it appeared a comeback was on the cards, we conceded a third. Despite a couple of great chances late in the game, it was just one of those days where the ball didn’t want to go in. The 1-3 loss sees the girls fall to third place.

The 14 Boys made lightning start as they scored inside 12 seconds. Sydney Futsal looked to settle as they dominated chances over the next few minutes. A second for the Taipans after 8 minutes seemed to deflate the home side who found themselves in foul trouble in the first half. A third soon followed before a last man red card for the home side saw Taipans score a fourth just before the break.

Things settled in the second and despite Sydney Futsal scoring two unanswered goals, it was too little too late as the damage had already been done in a solid 4-2 Taipans win.

The 15 Girls match turned out to be quite a see sawing game… Taipans led 2-0 mid way through first half with goals to Maya Turner after some good pressure and sustained possession. Sydney Futsal pulled a goal back late in the half to build some momentum and they capitalised by scoring two more in the second to take the lead. The Taipans rallied and a late goal to Jessica Bermudez salvaged a point in an entertaining 3-3 draw.

The 16 Boys match was quite extraordinary. Whilst the previously undefeated Taipans were expected to win this match, things didn’t go to plan. A couple of early defensive mistakes were capitalised by the home side and despite a mountain of pressure, Sydney Futsal were holding on with some fine goalkeeping and desperate defending. The second half saw much the same with Taipans holding a glutton of possession which was not being converted. The home side caught the Taipans napping to make it three mid-way through the second. The Taipans went to power play and again desperate defending saw the home side nab two more in an empty net. The Taipans scored a last second consolation through a penalty which keeper Riley Nicholl converted.

The boys’ shock loss seemed to stun the club as the 18 Girls who were starting to show some fine form got off to a slow and sluggish start and found themselves 0-3 down at the break. With things changed up, the girls come out firing and scored early to reduce the deficit but soon after found themselves 1-4 down. Both teams traded goals again before three goals inside the last 7 minutes including 2 inside the last 90 seconds helped rescue a point in a pulsating 5-5 draw.

The Youth were up next and they probably put in the performance of the day. It was a nervy first half and both teams had chances with goalkeeper Kaydin Harrison making a number of crucial saves to preserve a 2-1 lead into the break. These saves proved pivotal as the lads come out firing in the second and blasted the opposition off the court with five unanswered goals including a hat trick to Louis Connell. The 7-1 win sees them jump to second spot on the ladder.

The Women’s team had not won since round 3 and were slowly slipping away from the leaders however the ladies showed what they can do with a strong performance. The ladies held possession well and created numerous chances which helped them on to a handy 3-0 lead at the break. The Taipans then opened the flood gates with four goals inside 8 minutes to crack open the game and despite a couple of goals midway through the half, Taipans recorded a morale boosting 8-2 win highlighted by four goals to Danika Matos. The ladies move to third.

The Men’s team were looking to go back to back however an early goal proved to be a setback. The home side were brimming with confidence and they got a second midway through the half and had it not been for some terrific keeping from Brad Peryman, the Taipans got have lost a grip of the game however the keeper seemed to inspire the boys as Rick Goodchild pulled a goal back just before the break to give the Taipans some hope. The home side scored first in the second before the Taipans launched an amazing comeback with firstly Mitchell Ferraro pulling a goal back before Takao Teramato getting on the end of a Matt Mazevski shot to equalise. It was Mazevski then who put the Taipans in front with a well taken goal however just as it appeared the men were set for their second straight win, two goals in the final 6 minutes from the home side led to a heartbreaking 4-5 loss.

The club started the second half of the year hosting Sydney City Eagles on Saturday with the senior teams playing Boomerangs at home on Sunday.